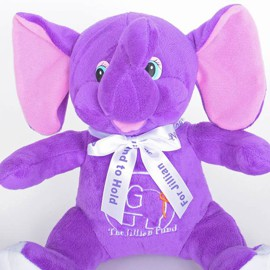 One day when Jillian was in kindergarten, she was summoned to the principal’s office to be reprimanded. She attempted to distract the principal by talking about the large collection of elephants in the room, and when the principal left momentarily to bring in some more elephants, Jillian climbed out the window and went to play with the other children outside. When the principal asked Jillian why she left the room, she replied that she went to look for more elephants.
And so, Jillian’s passion for elephants began.
Jillian began building her own collection of elephants, took every opportunity to learn about them and would always take an elephant ride when she visited the Bronx Zoo. She adopted an elephant at a Nairobi elephant orphanage and dreamed of visiting Africa and interacting with elephants in their natural environment. In Jillian’s memory, a Gorman family friend continues to contribute to the orphanage and support Jillian’s adopted elephant.
Jillian marveled at how elephants could be so large yet so gentle, and always talked about the good fortune one experiences when an elephant’s trunk points up.